On September 23rd, U.S. audiences will get some of their first tastes of Vechain – a Shanghai-based blockchain company. This will come via CNBC’s series “Advancements” with host Ted Danson, as he travels to Shanghai to profile the company and its work. You can read more on that here.

Those in the crypto space probably know about Vechain – it’s coin, VET (VEN-USD) (VEN was VET before a rebrand) currently the 19th most valuable cryptoasset in the market. Each VET token trades for about one and a half cents; after the company did a 1:100 token split to establish its new systems. But more on that later.

The crypto market has had its “bubble-pop” moment in 2018, seeing many coins trade for just 5-10% of their all-time high values. With the “pop” many believe some coins will go to zero. And with reports that several coins valued in the millions have no working product, this makes sense.

But Vechain does have a working product. It’s a product that the company has been developing since 2014: a blockchain-based ledger that helps record large-scale logistics for enterprises. With an original focus on anti-counterfeiting, Vechain has seen its blockchain idea expand to insurance, automobiles, luxury goods, and more. And it’s being used today – both with physical RFID tags the company has developed, and now in part of a recently announced partnership with BYD to work on a carbon credit system.

If that BYD name doesn’t ring a bell, maybe it should. The company is a Chinese car manufacturer. But not just any car manufacturer. A Buffett-backed, $27 billion valued, largest vehicle battery factory builder car company. The one that’s bigger than Tesla. The top electric car maker in the tope electric car market, boosted by a government that wants to see it succeed in making the world’s next great electronic vehicles. That one. And Vechain is now its blockchain partner in a government-backed program to track electric vehicle use and provide rewards for carbon karma.

And that was just last week’s announcement. The week before Vechain announced a partnership with People’s Insurance Company of China (NYSE:PICC); one of the world’s largest insurers and holders of +$120 billion in assets. The aim is complex: transform the insurance agency with the help of blockchain. Immutable record keeping, faster data transfers, etc…Vechain can help with all of it.

And those were just September. Both partnerships above involve Vechain’s partnership with DNV GL; the European logistics giant, itself one of the largest companies in the world. This partnership was announced earlier this year and saw Vechain’s token price explode to a market capitalization over $6 billion (or about 7x what it is now). Of course, this is when the crypto market was on its bull tear, so perhaps the news of a legitimate partnership like this; where a logistics blockchain company signs on to help a logistics company store and track its entire fleet, maybe have gotten lost in the hullabaloo.

And these are just three of Vechain’s partnerships. Others include the Chinese government itself, Renault, Kuehne and Nagel, Givenchy, and more (longer list here and here). But there’s another big one worth mentioning and that’s PwC – the global consulting and financial services giant. Vechain is a portfolio company in PwC’s Asian office; and the two have been working hand in hand over the last year to deliver on Vechain’s promise for a blockchain-backed world.

So as the crypto market suffers from the speculation bubble that fueled it in 2017 and early 2018, Vechain continues to add partners and legitimacy. 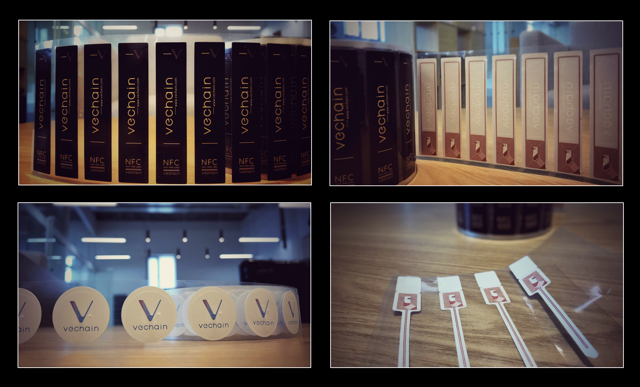 Vechian’s got the partners. But why would you need VET; and how is it an instrument of investment in this promising project?

VET operates as an asset tied to the Vechain blockchain. But unlike Bitcoin it is not a currency and unlike Ethereum it is not a way to “gas” the blockchain’s usage. Instead, VET is value-creating token. Every VET creates an offshoot coin called THOR (VTHO), which operates a bit like a dividend. The more VET you have the more THOR you are given (same wallet); and there are “node” bonuses along the way to incentivizing holding and accumulating. (In the newly released financial report, the company reported that 65% of supply is in the hands of VET holders). 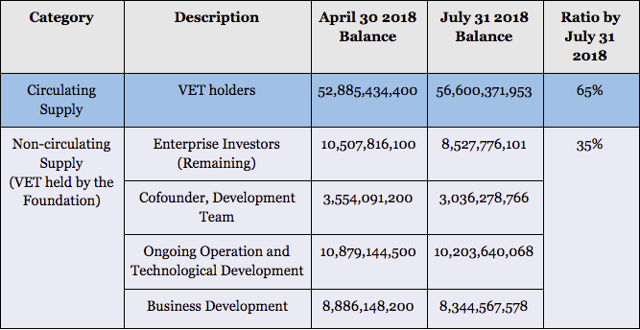 Though it’s not possible to tell how much VET is currently in nodes (some of which have lock-up rules that likely prevent holders from selling), estimates are over 50%.

But THOR is the value-maker here (while the value gets attributed to VET itself). If VET holders can produce THOR for a reasonable ROI, it attracts buyers to and drives VET price up. How does one get to a reason ROI on THOR? Blockchain use.

And that’s why the partnerships are so important. And why the size of the companies is an important early indicator. Ultimately, what will matter is the size of the company’s use of Vechain’s blockchain, because each time the chai is used, THOR is required. That’s the gas that keeps the blockchain going. The team has established a 21 THOR minimum for any transaction, but likely that will rise. And if BYD or PICC wants to use a thousand transactions per day to establish their data on the ledger, they will need THOR. They can get THOR either by (a) buying it from Vechain itself, which the team has hinted at limiting, (b) buying it on the market, which the team has admitted will require them to tweak THOR supplies to keep this from inflating, or (c) buy VET to produce their own THOR. Options B and C should see VET’s value rise significantly, and option A just legitimizes the chain for future clients. All three seem like a win.

But we’re not there yet. It will take months, maybe years, to get these clients to use the blockchain at the levels in which THOR will be “burned” in the millions (as is produced every day). So that means VET is a speculation investment on the back of these promising partnerships. And at a price that’s really 20% of its peak value, it looks like the most promising blockchain and crypto bet I’ve seen.

In what may be a simple reason for VET being undervalued at the moment, it’s difficult to buy the cryptoasset with fiat (national currency). You can see VET’s trading pairs here – the top fiat pairing is Bitfinex which one can see has a low volume. Most trading is done through Tether or Bitcoin. I think this gives VET opportunity to grow; as there’s no volume or easy on-ramp (like Coinbase) for USD pairing and still no KRW or CNY or JPY pairings. Same with the Euro and the Pound. (This may be for another article, but this means that VET pricing is still tied to BTC and ETH and the overall market. Which has meant that as Vechain adds these partnerships in mid 2018, the coin has gotten cheaper).

You can trade for VET on Binance (recommended way) or any of the other markets listed in the link above.