Cryptocurrency has been gaining a bit of traction publicity-wise of late.

Last week, Russia said it was considering accepting Bitcoin as a payment for oil and gas exports, but only from ‘friendly’ countries. (The rest can pay roubles, Vladimir Putin confirmed).

Back home, the Financial Services Ombudsman warned of the risks of investing in cryptocurrency after a sharp rise in the number of complaints it received last year around investment fraud relating to the emerging asset class.

And in recent months, El Salvador became the first country in the world to adopt Bitcoin as legal tender.

All the while, the value of the cryptocurrency has been swinging wildly, albeit in the ascendant in the last week or so.

Is it a fad or is it an investment instrument that’s likely to settle at an elevated value in time and one that we should be paying more attention to?

Bitcoin, the first of the recognised cryptocurrencies, emerged from the turmoil of the Great Financial Crisis of 2008.

As trust in banks plummeted, an individual or group of people using the name Satoshi Nakamoto produced a thesis on centralised control of money.

They suggested a way to conduct a financial transaction without using a third party bank or other institution, and thus the idea for bitcoin was conceived.

The resulting unit is stored in a digital wallet on a smartphone or computer.

In early 2009, the first test transaction took place after the technology that backs the cryptocurrency – known as the blockchain – was launched.

It would be more than a year before the first financial transaction using bitcoin would take place.

Hence, a value for Bitcoin was established at four for every one US cent.

The pizza delivery person would have done well to have paid for the pizza themselves with dollars and held onto the Bitcoin.

On the 12th of November last year – when Bitcoin hit its peak value to date – that initial trawl of 10,000 bitcoin would have been worth a whopping $644 million!

But they would have had to endure periods of euphoria and pain with their investment along the way.

“Its value is staggering,” Anne Hayden, who has lectured in cryptocurrency at the Institute of Investing and Financial Trading says.

“But the volatility is huge which makes it unreliable. I’ve always had difficulty calling it money. It’s too unreliable and unstable,” she explained.

And indeed a glance at a graph of bitcoin’s worth over the years paints a picture of an instrument that has made great strides in value terms, but it has been punctuated by periods of deep loss too.

By the same date the following year, the value of one bitcoin would have dipped to almost $3,000.

A high of over $61,000 in March 2021 would be followed by more losses but by November of that year, it would hit its highest value to date.

And Bitcoin is not the only cryptocurrency.

Others have emerged including Ethereum and Litecoin among the better known alternatives, but there are dozens in existence.

Central Banks are no fans of cryptocurrency, but proponents of digital currencies point out that they would, given that their very existence is arguably threatened by the invention of such instruments.

Peter Brown, Founder of Baggot Investment Partners, says the the distrust runs much deeper than that.

“The one thing that’s not liked about it is all the anti-money laundering work that’s done to find out about who owns what. You can’t walk into the bank and lodge €5,000 without telling them where it is. That’s all done away with when it comes to crypto,” he points out.

“It’s a money launderer’s dream because you can’t trace who’s using it,” he said.

In addition, regulators have a consumer protection mandate as well as a financial stability remit.

As recently as last week, the Central Bank of Ireland issued a warning about the risks of investing in ‘crypto-assets’- including digital currencies – branding them as ‘highly risky’ and ‘speculative.’

“Before you buy crypto assets, you need to think about whether you can afford to lose all the money you invest. Do the promised fast or high returns seem too good to be true?,” Derville Rowland, Director of Financial Conduct at the Central Bank pointed out.

It echoes similar warnings from the Bank of England about the potential for investors to lose all of their investment.

“Their price can vary quite considerably and they could theoretically or practically drop to zero,” Sir Jon Cunliffe, deputy governor of the Bank said.

“They’re not wrong,” Anne Hayden of the IIFT agrees.

“The volatility is huge. Nobody has made much trading crypto in the last 12 to 18 months, unless they were buying the dips,” she pointed out.

A study conducted by the bank concluded that about 2.3 million people were estimated to hold cryptocurrency in the UK with an average hold per person of £300, amounting to about 0.1% of UK household wealth. 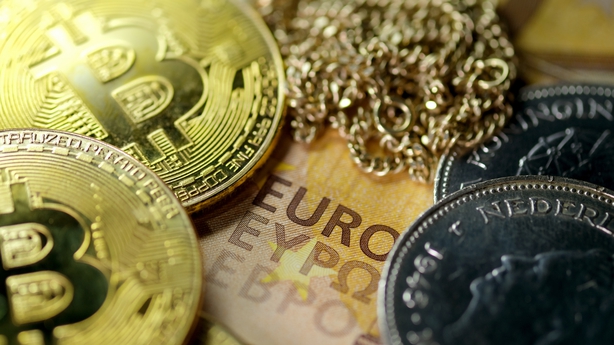 Is crypto emerging as a serious asset class?

While the aggregate portion of wealth invested in cryptocurrency is still quite low, investment banks have started to embrace it, although they’ve been relatively late to the game.

In some senses, they have come to realise that they can no longer ignore it.

“The reason banks and hedge funds get involved is because their customers want it,” Anne Hayden pointed out.

“It has a solid basis in technology but it’s sentiment driven. Anyone with a large amount of money in a fund is going to want 5% in crypto, just because they’re told they should. They don’t know why,” she explained.

Although some banks have developed their own crypto startups and their own versions of cryptocurrency, others have offered wealth management clients access to Bitcoin assets.

Morgan Stanley was the first investment bank to do so with three separate funds, although it only allows its wealthier clients access to what it considers an incredibly volatile asset.

Peter Brown agrees. He said it may be an investible asset as part of a wider portfolio. As a standalone investment though, you run the risk of losing all your money, he warned.

“We have a thing that we call the Junker strategy. That’s something that’s incredibly volatile that you put enough money into that you’re prepared to lose.”

“It’s like a penny stock. Your investment is more than likely going to go to zero, but if it goes to 10p, you’ve made 10 times your money. But you have to be prepared to lose your total investment. That’s the type gamble this is,” he explained.

Even amidst their distrust of crypto, central banks have been developing their own versions of digital currencies.

The European Central Bank, the US Federal Reserve and the People’s Bank of China are all researching different options with the PBOC rolling out a pilot scheme in selected cities.

China has banned trading and mining of cryptocurrencies like Bitcoin and its peers but it is pursuing areas of blockchain technology – where the technology remains under state control.

And it’s in the area of blockchain where Peter Brown believes the value lies.

“It’s essentially a store of information using a code. Much like the start of the internet, there’s a mass of activity and speculation as to who is going to use this technology the best,” he reckons.

A bill paving the way for the establishment of a digital euro is expected to be published as soon as early 2023 with the expectation that a version could be ready for use by the middle of the decade.

The ECB website describes the digital currency as being “like banknotes, but digital” and emphasises that it would be designed to compliment rather than replace the physical euro.

Anne Hayden says it’s to be expected that central banks would get involved in the digital currency area given that there’s no going back on the concept.

“They’re worried that the emergence of digital currencies will weaken their own currencies,” she says.

Peter Brown has a similar view but said the Central Bank versions are the ones that will ultimately be utilised.

“If you get a regulated version, that’s the one that big business will turn to. The alternative will be the black market versions. There will always be suspicion as to who’s using it,” he argues.

Others believe Bitcoin, in particular, will have starter’s advantage and will stay ahead of the pack.

Where the price will go in a more competitive and regulated environment is anyone’s guess.