SACRAMENTO, Calif. — California, which would have the world’s fifth-largest economy if it was a country, on Wednesday became the first U.S. state to formally begin examining how to broadly adapt to cryptocurrency and related innovations, following a path laid out by President Joe Biden in March.

Gov. Gavin Newsom signed an executive order for state agencies to move in tandem with the federal government to craft regulations for digital currencies. It also calls for officials to explore incorporating broader blockchain computer coding into the government operations of the state where much of the world’s technological innovation is born.

Evolving blockchain and cryptocurrency technology “is potentially an explosive creator of new companies and new jobs and new opportunities,” said Dee Dee Myers, a senior advisor to Newsom and director of the Governor’s Office of Business and Economic Development.

“So there are a lot of opportunities,” she said. “There’s also a lot of unknowns in the industry and so that’s another reason we want to engage early.”

Newsom’s order says the state — home to Silicon Valley and financial innovators like PayPal and Square — should be out front in figuring out how to adapt to new technologies.

“Too often government lags behind technological advancements, so we’re getting ahead of the curve on this, laying the foundation to allow for consumers and business to thrive,” Newsom, a Democrat, said in a statement.

California has about 39 million residents and its economy is more than $3.1 trillion, larger on its own as a U.S. state than the United Kingdom and India. Newsom said his order is a step toward making it the nation’s first state “to establish a comprehensive, thoughtful, and harmonized regulatory and business environment for crypto assets.”

Cryptocurrencies, which are built on blockchain database technology, have exploded in popularity in recent years. About 16% of U.S. adults have invested in, traded, or used cryptocurrencies and the percentage is much higher among younger men. Biden’s executive order in part asks the Federal Reserve to consider whether it should create its own digital currency.

Blockchain creates the underlying transparency of a decentralized but publicly viewable ledger. The technology can also be used to record other types of information, such as property records. The records are held on many computers that together form a global network so that no one and no institution can control them.

There is heavy disagreement about the legitimacy of cryptocurrency, even among some of the world’s richest people. Elon Musk is an avid supporter of dogecoin while Warren Buffet recently said he wouldn’t pay $25 for all of the world’s bitcoin, the most popular cryptocurrency. Each bitcoin is currently valued at about $38,000.

While California may be first to try to develop a comprehensive approach, Ohio was the first to attempt to accept virtual currency for government services in 2018, though the program was soon discontinued because few people used it.

Colorado Gov. Jared Polis, also a Democrat, said in February that his state would begin accepting cryptocurrency for government services later this year.

California lawmakers are among many around the the U.S. who have offered related legislation. But a bill by Democratic Sen. Sydney Kamlager to allow California to accept crypto assets for state services failed in its first committee this year and a similar bill by Republican Assemblyman Jordan Cunningham is stalled.

Similar measures have been introduced in Arizona, Wyoming and other states.

Despite the potential pitfalls of cryptocurrency, Newsom’s order says California should take the lead in figuring out how to adapt to the technological evolution.

His order builds on a July 2020 report by the California Blockchain Working Group, which examined the use of blockchain along with its risks and benefits.

California that same year created a new Department of Financial Protection and Innovation from what had been the Department of Business Oversight, with a goal of evaluating emerging risks and opportunities while protecting consumers.

Newsom’s order calls for the department to develop guidelines for disclosures by companies when they offer financial products and services related to cryptocurrencies. It will also provide guidelines for state-chartered banks and credit unions regarding crypto-related products.

The department will respond to consumer complaints, work with crypto companies to resolve consumer complaints and take enforcement action when needed. It will also publish consumer education materials, including advice on avoiding crypto-related scams and frauds.

Newsom’s order directs a separate agency to solicit proposals for how best to use blockchain to help the state and the public.

“It is critical that we engage early with industry and start learning the pros and cons of innovative technology early,” said Amy Tong, secretary of California’s Government Operations Agency. “We can take the next steps towards getting ahead of the curve and harnessing potential of these tools to make government better.”

FILE — California Gov. Gavin Newsom speaks during a news conference in Sacramento, Calif., on Jan. 10, 2022. California on Wednesday, May 4, 2022, became the first state to formally begin examining how to adapt to cryptocurrency and related technologies, following in the path laid out by President Joe Biden in March. Gov. Gavin Newsom signed an executive order for California agencies to move in tandem with the federal government to craft regulations for digital currencies. (AP Photo/Rich Pedroncelli) 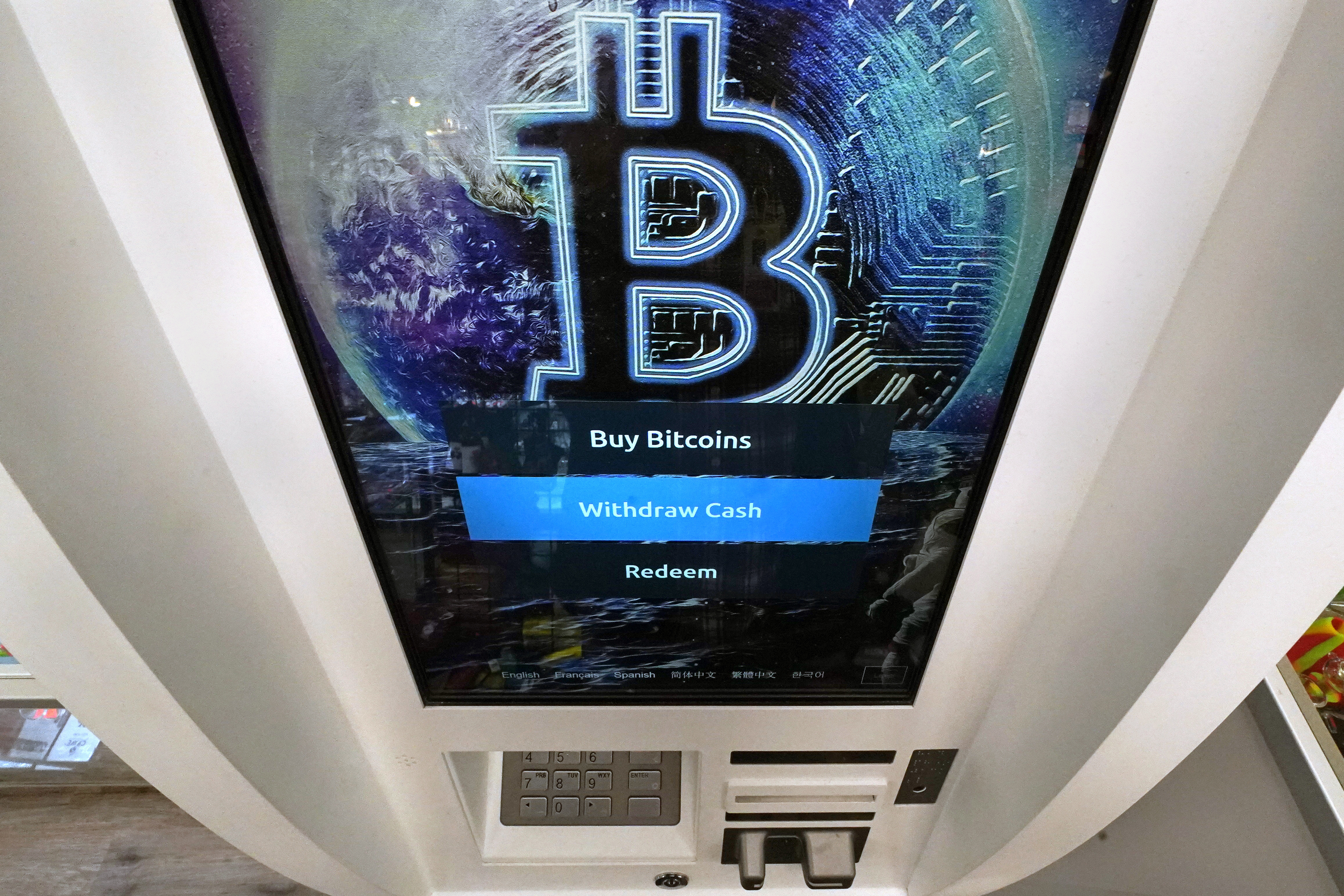 FILE – In this Feb. 9, 2021, photo, the Bitcoin logo appears on the display screen of a cryptocurrency ATM at a store in Salem, N.H. California on Wednesday, May 4, 2022, became the first state to formally begin examining how to adapt to cryptocurrency and related technologies, following in the path laid out by President Joe Biden in March. (AP Photo/Charles Krupa, File)