When Bitcoin “forked” into Bitcoin Cash, many people predicted the latter would overtake the former. It never happened, which is not too surprising. Bitcoin SV, which forked from Bitcoin Cash, would become another rival yet never succeeded. Where are these two forks now, and do they play any role of importance?

The term “relevancy” is used loosely in this context, as neither BCH nor BSV ever played a big role of importance. There has been a small hashrate war between Bitcoin and Bitcoin Cash over the years, although no threat ever materialized. Moreover, Bitcoin SV never gained any real hashrate to speak of, even though the network has a tremendous amount of transactions and pretty large network blocks.

In the end, there are only two crucial transactions to determine how these Bitcoin forks fare. Their hashrate and network nodes need to be competitive with Bitcoin’s numbers to be considered remotely relevant. Unfortunately for fans of BCH or BSV, neither network amounts to much. One can have all the transactions and bigger blocks one desires, but neither network competes with Bitcoin, or even most altcoins, for traction. Nor will they ever, by the state of affairs today.

Bitcoin, the world’s leading cryptocurrency, represents 98.7% of the mining hashrate. More specifically, the hashrate of BTC, BCH, BSV, and eCash combined. Bitcoin Cash remains the second-biggest network, despite having 0.9% of the mining power. Bitcoin SV is even further down with 0.22%. For networks relying on Proof-of-Work, the lack of mining support speaks volumes.

On the network nodes front, Bitcoin beats the competition hands down. Bitcoin Cash has 4% of all network nodes, whereas Bitcoin SV represents a measly 0.56%. Another sign of how irrelevant both networks are in the broader scheme of things. Even so, Bitcoin Cash sustains a market cap of over $5.1 billion, whereas Bitcoin SV represents over $1.378 billion. It only confirms how market cap is a misleading metric for cryptocurrency projects.

Bitcoin SV Mining Is Most Profitable

Despite these clear-cut statistics, miners may want to explore the BSV network. More specifically, miners chasing profitability above everything else can make more money mining Bitcoin SV than any of the other networks. That 2.2% difference will not be sufficient to make most miners change their mind, though. Unloading a big amount of BSV will likely further collapse the price, negating higher profitability.

Mining pools are the go-to approach to mining Bitcoin or any of these forks. Bitcoin has a good selection of mining pools, with roughly a dozen options to choose from. BCH is off slightly worse due to having only ten pools, most of which support BTC mining too. For Bitcoin SV, there are four major pools and a big chunk of “other miners”. 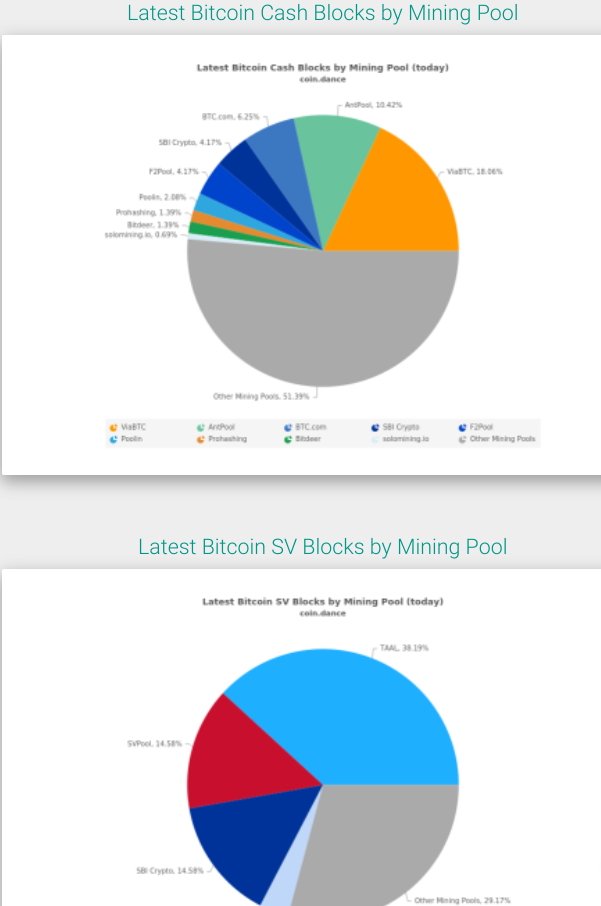 Overall, there is little to no future ahead for BCH or BSV where crucial metrics are concerned. Although both networks have dedicated fans and supporters, neither network can live up to the initial expectations of dethroning Bitcoin.

CryptoMode produces high quality content for cryptocurrency companies. We have provided brand exposure for dozens of companies to date, and you can be one of them. All of our clients appreciate our value/pricing ratio.
Contact us if you have any questions: [email protected]
None of the information on this website is investment or financial advice. CryptoMode is not responsible for any financial losses sustained by acting on information provided on this website by its authors or clients.