Today’s European session was pretty quiet for the most part, with markets awaiting the US CPI inflation report later in the day. The USD was steady earlier but saw some light weakness in the last hours leading to the CPI release, as there were some positioning flows ahead of the key economic release ahead of US markets open. EUR/USD stuck around 1.0040-60 mostly before jumping to 1.01 during the CPI release and then diving 100 pips lower to parity at 1, which held again.

We were long on the USD and short on Ethereum, NZD/USD , and Gold. All those signals hit the take profit target as the market made quite a reversal lower after the CPI inflation report was released. We sold ETH/USD a while ago as this cryptocurrency was retracing higher and 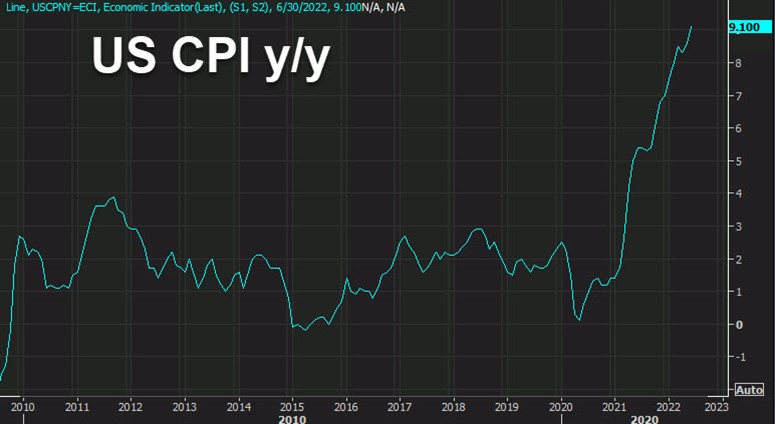 Inflation is running hot again. This is the highest reading in more than 40 years, since November 1981. The FED funds futures market has quickly priced in a 23% chance of the Fed hiking 100 bps in two weeks. The details are important here. The CPI energy index rose 7.5% MoM, contributing nearly half of the total increase. Energy is up 41.6% YoY. Given where gasoline prices currently are, those numbers will reverse in July.

Otherwise, the vehicle component is worrisome as it remains high and rents continue to creep up. I’d be a bit more dismissive of the report if it was more food-driven but there are a few components pushing it upwards. Used cars are particularly surprising because the Manheim used car index was lower in the month. On headline shock alone, “above 9%” isn’t pretty for main street and the Fed will have a hard time softening its stance.