The main purpose of Litecoin is to become a global payment system with more scalability and faster transaction speed. It helps to make borderless payments without any central authority such as a bank and offers faster transactions at lower costs. All these benefits make Litecoin one of the popular platforms for small transactions, whereas Bitcoin remains a preferred network for bigger transactions.

The main purpose of originating a forked version of Bitcoin is to improve the Bitcoin drawbacks. Litecoin is four times faster than Bitcoin because it creates a block within 2.5 minutes, whereas Bitcoin takes around 10 minutes to confirm a block.

In the last few years, merchants have accepted Litecoin for borderless transactions. The price of LTC is expected to grow in the coming years. If you are interested, please read this LTC price prediction to get long-term and short-term price projections for Litecoin.

At the time of writing this post, LTC was trading around $56.24. Litecoin is in a consolidation phase for the short term with the resistance of $70 and support of $43, forming higher lows. $70 will work as a strong resistance level, and LTC will not turn bullish until it crosses this resistance.

Moreover, MACD is bullish forming green histograms, but candlesticks are hitting the upper range of the Bollinger bands with red candles, which may suggest the price may come to the level of $50. 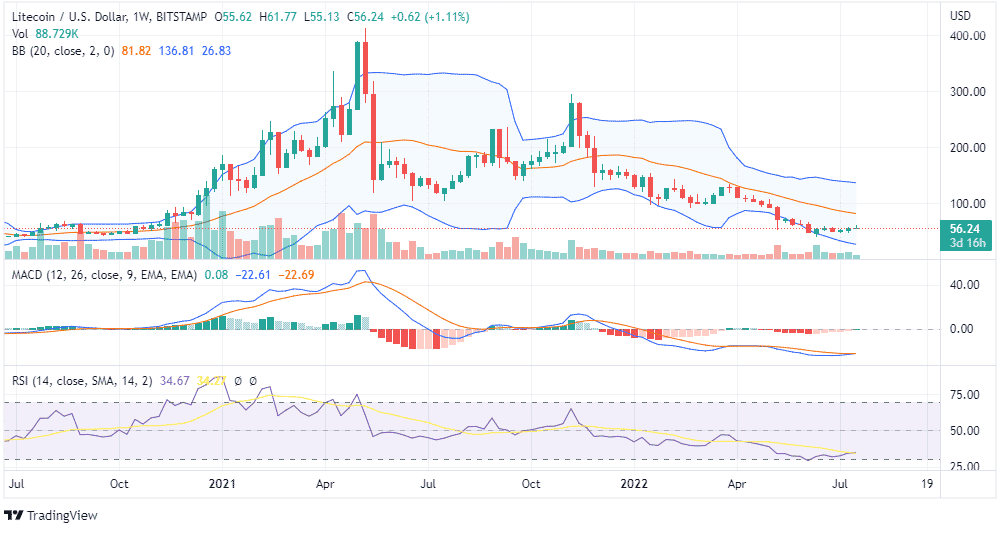 We think it is a good time for the long-term investment because $45 is strong support in the long term, and Litecoin will not break this level soon. It is expected that the price of the coin may go up to $100 if it crosses the short-term resistance level.

This week’s MACD has formed a green histogram, which seems to be bullish soon. RSI and other major technical indicators are stable. You can invest in LTC for the long term and treat it as an asset.